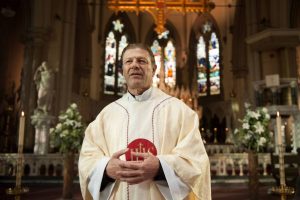 ‘Broken” is the first of two television shows that Sean is starring in and he is also the executive producer of this six episode drama. In this series, SEAN PLAYS A catholic Jesuit Priest named Fr. Michael. He is assigned to a working class urban parish in Liverpool. It will be shown on the BBC network this May. It was written by Jimmy McGovern, the same writer who wrote the “Accused” series in which Sean Bean also shared a starring role. There is no trailer for “Broken” as of yet, but you can read more about it in the magazine, “Jesuits and Friends”. This is a free download from the Catholic Church. As you can see, “Broken” and Sean are on the cover. More news later….